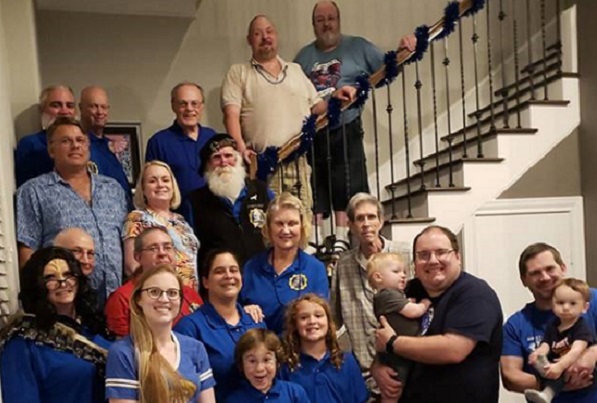 Food and fireworks and fun, oh my! The third annual Federation Day Celebration of the USS Zavala took place July 7, 2018. The lovely new home of Zavala CMO Wendy Weston was filled with everything blue and white (Federation Flag colors) for the celebration including flags large and small, lighted table centerpieces, blue light cubes, blue and white stars on the blue and white tablecloths, and a special blue Delta Shield shaped door decoration created especially for the event by Joanna Howard. Dress code for the evening was, of course, blue and white! The décor set the stage for the 30 attendees, including guests from the USS Ark Angel and the USS Endurance, to party the evening away after everyone stood for the playing of the Federation Anthem (via video). Many of us had never heard it before. Then it was on to the food.

The potluck dinner offered a wide variety of offerings for different appetites including lasagna, chicken fettuccine, fruit, cheese, hummus, crackers and spreads, several salads, and other finger-food to enjoy throughout the night. Special desserts were planned in advance and provided by Wendy and Esther Melendez. A “Captain’s Cake” was iced to mimic a Captain’s uniform, and blue and white cupcakes sported miniature Federation Flags on top. Beverages included the usual tea and soft drinks, but a special edition Klingon Blood Wine punch, created from Robert Hall’s secret recipe, in both alcoholic and non-alcoholic versions, was extremely popular!

Still recognizing the 25th anniversary of ST:DS9, crew members watched several episodes of DS9 while eating and socializing. Several members participated in a charity poker game with all money collected going to the chapter local charity, the Houston Area Women’s Center. The CO provided a prize for the winner and runner-up.

Donations of school supplies for the children of HAWC were also collected at this event in anticipation of our hands-on assistance with their back to school backpack project in August. After dark, activities were on a break while everyone went outside and enjoyed celebratory sparklers. A few people had to leave early but most attendees stayed till the end continuing to enjoy the food and fellowship.

The USS Zavala’s next celebration will be the annual Bajoran Gratitude Feast in October. Theme colors will be purple, gold, and white (we like party themes).