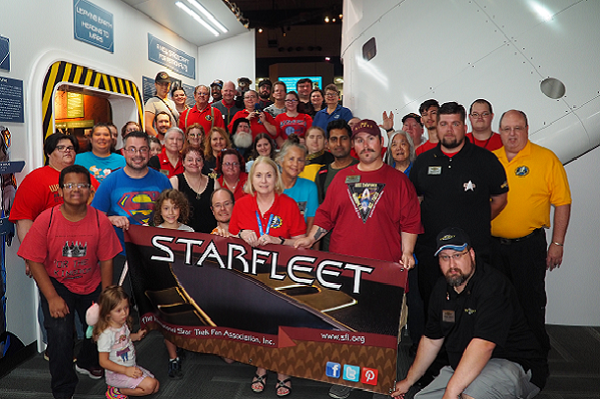 The space center tour included tram tours that took members onto the NASA Johnson Space Center property next door to see the newly restored Apollo Mission Control Center. The approximately $5 million dollar renovation restored that control room to its appearance on July 20, 1969, down to the last details of papers, notebooks, coffee mugs, ashtrays, flags, maps and screen displays. All details were reproduced or restored including the wallpaper, carpeting, display panels and screens, chairs, and wall décor. A special audio and video presentation accompanied the control room tour, taking you back to the minutes just preceding the first touchdown on the moon.
A separate tram tour took visitors to see NASA’s JSC astronaut training areas and the mission control room used for the International Space Station. Other exciting areas to explore in the space center included Journey to Mars, Orion space capsule, historical artifacts including Mercury, Gemini and Apollo capsules, spacesuits worn throughout man’s exploration of space up through the current ISS missions, space shuttle trainer USS Independence, the aircraft used to transport the space shuttles across the country, 2 movie theaters, a talk by astronaut Kenneth Cameron, Rocket Park that includes a complete Saturn V rocket, special art display celebrating the moon landing, a kids’ fun zone, virtual reality rides, food court, and the gift shops.
I saw a lot of shopping bags from the gift shop leave the center at the end of the day! Forty-two of the attendees were able to stay for a celebra-tory dinner after their day of exploration. Victor’s American Diner, just next door to SCH and JSC, provided plenty of room to host our large crowd.
R3 RC Jeremy Carsten greeted those gathered and recognized some recent accomplishments of region members. He also thanked the USS Zavala for sponsoring the event. The dinner also marked the 8th anniversary of the commissioning of the USS Zavala.
Several Zavala chapter members were recognized
with awards. Other than R3 Summit, the trips to Space Center Houston (of which this was the fourth) are the largest gathering of regional members and we take full advantage of that to spend time visiting
with friends we don’t see often enough.