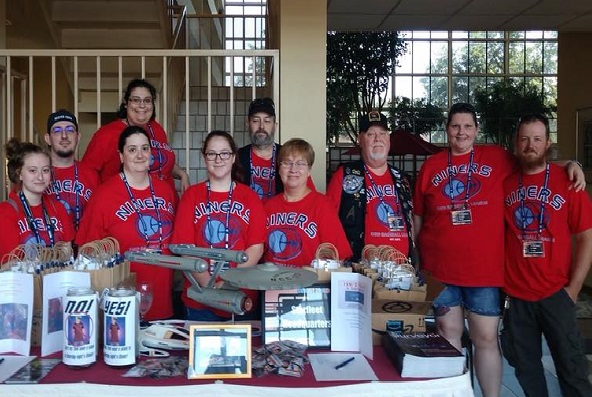 The 2018 Region 3 Summit took place in Irving, Texas, at the Atrium Hotel & Suites. The crew of the USS Diamondback from Abilene, Texas, hosted this year’s event, themed as a holodeck getaway with an emphasis on the 25th anniversary of the Deep Space 9 series. This theme suggested the costuming possibilities for the weekend including each of the banquets.

with raised funds being divided equally between Cook’s Children’s Hospital in Fort Worth and Hendrick Children’s Hospital in Abilene. Friday’s events began with registration in the late afternoon with the Diamondback crew sporting matching Niner’s t-shirts. Each guest was treated to a handmade gift bag crafted by Cadet First Class Kendalyn Jarrett filled with all the important information for the weekend plus a few gifts from the City of Irving and Grapevine Mills Mall. There were a total of 65 members in attendance for the weekend.

The Friday events progressed with “An Evening at Vic Fontaine’s,” the dinner orchestrated
by Third Brigade DOIC Jeremy Carsten. Thirty-nine Marines and guests attended.  Special dignitaries for the evening were David and Linda Kloempken, representing IC-2018; Matthew and Jari Whiteacre, representing the Klingon Assault Group Cold Revenge. Attendees were treated to a fantastic meal, entrees of chicken or pork loin, splendid desserts, plentiful grog and an evening of impromptu skits, songs, and limericks. One of the evening’s highlights was a  rendition of “Stand By Your Man,” performed by Third Brigade S-1 Thomas “Tank” Clark and his lovely wife, Tracy.

After all the fun and games, the 2018 Valor Awards for the Third Brigade were awarded as follows:

Saturday events kicked off bright and early with Opening Ceremonies which included a Parade of Chapters. This year 13 chapters were represented at Summit by either the CO or a chapter representative taking part in the processional. One of the major changes for this year’s Opening Ceremonies was the addition of Final Mission to the opening rather than the closing of Summit activities. Also, the American flag used for the Final Mission ceremony was replaced with the STARFLEET flag. The changes were well received and seemed to flow quite nicely, although the Honor Guard did have to practice the folding of the new flag.

Opening Ceremonies were followed by a Mystery Luncheon hosted by crew of the USS Diamondback. A great artifact had been discovered; while being transported by the Enterprise-D, however, the amazing Orb of Knowledge disappeared. Attendees had to resolve the mystery over the course of the luncheon with clues provided by the crew. Pizza was served for lunch and donations were taken for Children’s Miracle Network. The cast of the mystery were all from the Diamondback: Gary Christeson as LT CDR Will Riker; David Jarrett as LT Worf; Chis Hoxsey as Data; Becky Green as Counselor Deanna Troi; Kendalyn Jarrett as Dr. Beverly Crusher; Lee Richey as LT CDR Geordi LaForge; Bonnie McKillip as ENS Ro Laren; Donna Jarrett as Guinan; Dwanna Enloe as the narrator; and Larry Pendleton and Patrick Green as guards. Props were created by LCDR Dan Joplin. The master mystery sleuth for the event was Michael Brown with the only correct conclusion to “Who-dun-nit?” 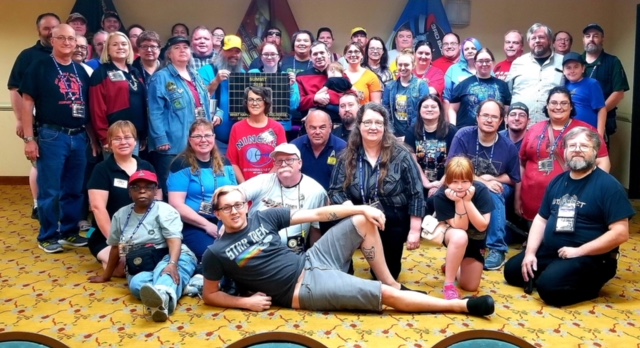 Sessions were presented by VADM Lucy Ferron, LCDR Dan Joplin, BDR Tank and CDR Tracy Clark, and LTC Sarah Hays. Lucy was kind enough to share with attendees her knowledge of member recognition and awards submission. Dan shared his personal expertise in the area of prop and model building including a display of a very impressive Enterprise model kit Dan himself completed. The Clarks amazed members with their combined knowledge of uniforms and costume design which included a slide show and an abundance of wonderful costuming examples. Sarah rounded out the afternoon by sharing her talent for assembling newsletters. Region 3 and the Third Brigade are very proud of the work Sarah does for the Brigade’s Cry Havoc! Newsletter.

Summit attendees were very fortunate to be able to learn from such a talented group of the Region’s members. Diamondback cadets Kendalyn Jarrett and Bonnie McKillip organized activities for the other cadets in attendance, including building care packages for donation to Hendrick Children’s Hospital.

Marine Muster gave Third Brigade the opportunity to discuss the current state of affairs and to recognize its individual Marines and Units for their accomplishments during the previous year. Congratulations to all award winners and many thanks for all the hard work and dedication to the Third Brigade that these awards represent. Recognitions were as follows:

Saturday evening was completed with the annual Admiral’s Dinner, Awards Ceremony, and Charity Auction. Costumes were an eclectic collection for the evening’s festivities. From Klingons and

Tellarites to a Niners player and a beautiful example from the Steampunk genre, the talent and flair of Region 3 was on full display.

The Clarks spiced up the evening with an additional fundraiser for CMN. Throughout Saturday’s events, attendees were encouraged to vote on Tank’s evening wear by contributions to a pair of labeled containers featuring “Yes” or “No!”  voting choices to determine whether or not he would appear in a special uniform variation at the banquet. The masses spoke loud and clear, and Tank proudly donned a Next Gen Skant for the evening. An amazing meal of ribeye steak or Florentine chicken was followed by a beautiful cake honoring the DS9 anniversary. Table decorations, votive candle holders designed with Star Trek insignia and lighted with winding LED string lights, would later become part of the Charity Auction. Several of the dedicated members of Region 3 were recognized following the meal. Congratulations are due to each winner and many thanks to the awards committee for all of their hard work. Recognitions were presented as follows:

The evening concluded with the live Charity auction. Due to the generosity of the Region’s donors and bidders, the auction was a huge success! Donations were collected from various region members including Gene Spillers, widower of Pat Spillers who passed from the graces of Region 3 a few years ago and is fondly remembered by many. Throughout the course of the weekend, over $4000 was collectively raised to benefit CMN.

The weekend concluded with a Sunday morning CCO Meeting and Closing Ceremonies. Many had to begin their journey home at this point, but for those granted the luxury of an extended stay, an Away Mission to the Rainforest Cafe at Grapevine Mills Mall for lunch and further adventures was available. Approximately 30 members continued the festivities at the local outlet mall, which allowed for a variety of activities after lunch such as shopping, bowling, and movies. Following the outing, members gathered for the Dead Dog Party back at the hotel to round out the fun. The weekend did not disappoint with its non-stop fun and fellowship.

The crew of the Diamondback would like to express its appreciation once again to Region 3 and SFI for affording us this opportunity to be of service and are already looking forward to next year!