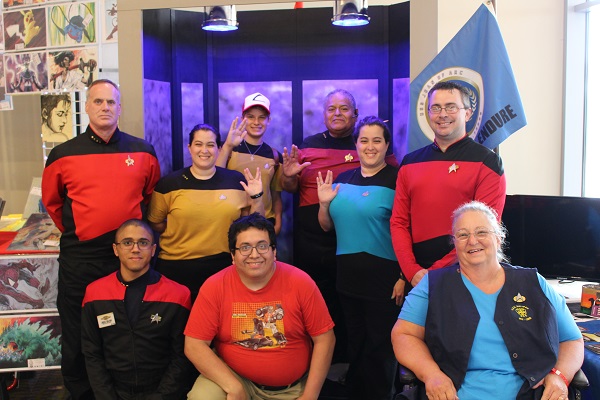 The USS JOAN of ARC, assisted by the USS BEXAR, beamed down to the Corpus Christi ComicCon held June 29-30, 2019, helped to raise awareness of STARFLEET, and raised funds for Fallen Horse Rescue . This charity saves abused and unwanted equines, rehabilitates them, and then they are rehomed if possible.

For the convention, the Joan of Arc’s Chief Engineer Daniel Burns constructed a transportor photo booth for selfies and group pictures that convention attendees could take advantage of. The 501st Star Wars group arrested Captains Robert Velasquez and Bernard Dacey, but once more, proving the superiority of STARFLEET Training, they used their diplomacy skills, were released, and avoided an intergalactic incident.

Many new contacts with fellow Star Trek fans and potential new sponsors for future charity events were established at this ComicCon.

“On Behalf of the U.S.S. Joan of Arc we thank the U.S.S. Bexar, Region 3, and Corpus Christi Comic Con for everything they have done to make this event a success,” states LT CMDR Jaden Galvan, Chief Operations Officer, USS JOAN OF ARC.